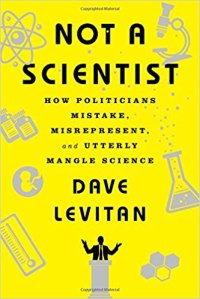 Over the turbulent past couple of years, many Americans have become more politically aware. No matter which party you back, the challenges to balance of power in the United State of America has been complicated by a lack of facts.

Science has essentially been neglected or even tossed aside by the Trump administration. The book Not a Scientist: How Politicians Mistake, Misrepresent and Utterly Mangle Science, author Dave Levitan attempts to identify the many ways in which politicians have abused or ignored science. The book was  quite humorous and a quick read.

“Science doesn’t sit by itself, alone in a lab coat, pondering the mysteries of the universe with little outside influence or consequence. When politicians mistake scientific issues, it can have ripples on our everyday lives,” he wrote.

Levitan nails the climate change deniers with their own brands of deception. The book hits so-called conservatives and Tea Party acolytes like Sarah Palin, Rick Santorum, Ted Cruz, Ben Carson, James Inhofe, Rick Perry, Rand Paul, Mo Brooks, and presidents Ronald Reagan and George W. Bush. Even the technique of a failed politician like Todd Akin (the “legitimate rape” infamy) was debunked. Levitan also nitpicked President Barack Obama as well, though the majority of the low lights came from climate-deniers on the Republican side of politics.

The book was completed before the end of Obama’s term and before Donald Trump was elected to the White House, but Levitan acknowledges the dangers of a Trump administration in the book’s foreward. “What the new president does not know about science could fill a book on its own….In short, his errors on science topics are so blatant, so crude, so lacking in even the most basic understanding of physics or biology or chemistry or any other discipline that debunking them often requires essentially no effort at all….With such anti-science attitudes now residing at the very top echelons of government, the tools presented here have arguably become more important.” It has proven to be even worse than expected, with Trump’s cabinet filled with science deniers.

“It is a remarkably common refrain: every time a major snowstorm hits, or a cold snap freezes New York or Chicago for a few days, the deniers jump on their soapboxes and crow that global warming [or climate change] can’t possibly be happening.” Levitan coined a new term for this, he called it “TOADS” — Those who Oppose Action/Deniers/Skeptics.

Levitan analyzes 12 main ways that politicians evade science. I’ll use his words without giving away the many examples from politicians he uses throughout the book: