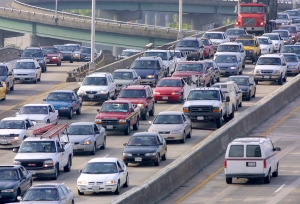 Traffic Backup on I-95 North at the Intersection with the Downtown Expressway in Richmond. Photographer – Tom Saunders, VDOT

I bike to save money. I bike to save the environment. I bike to improve my health. I also bike to stay away from my car and as often as I can, I look for ways to avoid motorized vehicles when walking, biking or even paddling could get the job done just as well.

Despite the many flaws with cars, they are not my enemy, but I sure do love avoiding them. Read this well-written lede into this article, from the CityLab:

There are lots of problems that stem from the way we use cars. We price roads incorrectly, so people overuse them. Cars are a major source of air pollution, including the carbon emissions that are causing climate change. Car crashes kill tens of thousands of Americans every year, injure many more, and cost us billions in medical costs and property damage. And building our cities to accommodate cars leads to sprawl that pushes us further apart from one another.

But the problem is not that cars (or the people who drive them) are evil, but that we use them too much, and in dangerous ways. And that’s because we’ve put in place incentives and infrastructure that encourage, or even require, us to do so. When we subsidize roads, socialize the costs of pollution, crashes and parking, and even legally require that our communities be built in ways that make it impossible to live without a car, we send people strong signals to buy and own cars and to drive—a lot. As a result, we drive too much, and frequently at unsafe speeds given the urban environment.

Many people—transit boosters, cyclists, planners, environmentalists, safety advocates—look at the end result of all this, and understandably reach the conclusion that cars are the enemy. The overriding policy question, then, becomes: “How do we get people out of their cars?”

Our road network is heavily subsidized. If we want better roads, we should be prepared to pay more at the pump.

Road users should pay for the roads and increasing the federal and state gas taxes might be the best way to do it. We are way overdue for an increase, according to this article in the Washington Post (2014):

It was last raised, in the year 1993, to 18.4 cents per gallon. That’s over 20 years ago, and gas prices at the time were close to the now unimaginable $1.00 per gallon mark. Yet the amount of the gas tax was fixed and not tied to inflation — so it has not changed since. (U.S. states also charge gasoline taxes; the national average is about 23.5 cents.)

Increase the gas tax to raise more revenue to repair and maintain our road network. Don’t build new roads, just maintain what we have.

Take some time to reflect on your own habits. Where could you eliminate a car trip or two? How could a bus or train help supplement your transit? Would walking or biking get you where you need to be just as well or better than a car? I constantly find myself playing this very helpful game of trying to avoid my car as often as I can. For the past year, I’ve been able to get plenty more bike trips in to replace car trips and I’ve loved every second of it. Stopping short of moving closer to shopping, recreation, work, transit lines, etc., this has been a successful first step in minimizing my dependence on the automobile.