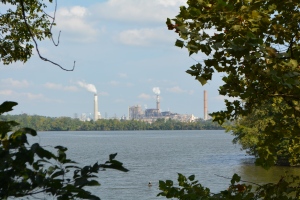 My children and I biked and hiked this past weekend at Dutch Gap Conservation Area and Henricus Historical Park in southeastern Chesterfield County. Both parks offer lovely views of the James River and a departure from our more urban areas around Richmond.

As we drove up, before we began our adventures for the day, my son wondered aloud about the smoke/steam/pollution/discharge billowing out of two towering chimneys at the Dominion Virginia Power plant that is adjacent to the two parks. I had no solid answers in regards to the pollution, but we spent time throughout the day discussing coal ash, fly ash, retention ponds and the residual effects from generating power.

(These types of discussions make it easier to teach my children to conserve energy by cutting off lights and powered devices when they exit rooms.)

Come to find that Dominion is under more scrutiny than I knew during our discussions, as the Southern Environment Law Center and the James River Association have been monitoring pollution levels at Dominion Power’s Chesterfield plant:

Coal ash toxins are leaking into fishing and boating areas from the pits at the Chesterfield Power Station, according to recent testing of water and sediment.

SELC and the James River Association recently sent test results to state officials, alerting them that recreational areas used by thousands of fishermen, hikers, bikers and boaters are being polluted with coal ash toxins.

The Dutch Gap Conservation Area and the Henricus Historical Park – both popular recreational sites in Chesterfield County – border the pits and ponds thought to contain at least 20 million tons of coal ash.

The latest samples taken from water next to the coal ash pits showed high concentrations of zinc, nickel, copper and lead, which is evidence that coal ash toxins are leaking into the water.

I told my children that coal ash had to be buried in landfills, but that apparently is not the plan:

SELC and JRA are also opposing Dominion’s plans to bury the coal ash at the site, and instead are advocating for a better solution that will stop the leaching of heavy metals and other toxic pollutants into the James River.