Benefiting from ridding the world of cigarette butt waste, one filter at a time 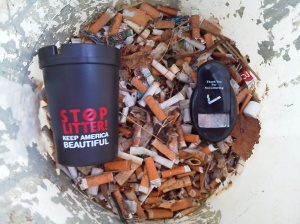 I’ve fought many battles over cigarette butts in my lifetime. As a kid, I used to hound my father when he’d toss his into the yard when he’d finished. I’d gather them and bring them by the handful. He didn’t like it and I don’t think I ever changed his behavior much. My dislike for cigarette butt litter has not wavered over the years — in fact, I think it has gotten worse.

My passion for removing cigarette butts has lead me to many cleanups where I’ve gathered them by the hundreds in places like the James River Park, Bryan Park, at traffic stops (drivers are the worst) and even along Virginia Dare (N.C. Route 12) in the Outer Banks. I’ve been known to tweet the license plate number of an automobile when I see a driver toss a cigarette butt out the window.

Picking up the litter and throwing it in the trash is satisfying. But it is hard work to pick up such small items. It is also time consuming.

What if there was a reward? Picking up aluminum cans, glass bottles and plastics at least has the reward of recycling. About a year ago, I learned there was a company called TerraCycle that recycles cigarette filters. A recent article from the website called Fusion explained the TerraCycle process:

Cigarette butts are the worst—they dot sidewalks, clog gutters, and soil oceans. Now a New Jersey-based company has found a way to recycle these unwelcome discards, and the program has gone global. Known as the Cigarette Waste Brigade, TerraCycle’s effort to make recycling cigarettes easier for smokers is a first-of-its-kind program.

The numbers on cigarette butt litter are astounding:

According to the National Institutes of Health (NIH) around 4.5 trillion of the six trillion cigarettes smoked every year end up in the environment, i.e. as litter. NIH estimates that in 2011 alone there were about 110 million pounds of discarded waste from U.S. cigarette consumption—a significant chunk of which ends up accounting for more than a third of the nation’s roadside litter.

Many cigarette filters are made of cellulose acetate, a high-grade plastic. They contain toxins that, when littered, leak into the surrounding environment, according to the article. It only takes a single cigarette butt to contaminate a liter of water.

What they do with the filters when they get them is amazing:

When TerraCycle gets a bundle of used cigarettes, the filters are first sterilized and then shredded, according to [TerraCycle]. The remaining tobacco is then composted and the shredded filter is blended with other recycled materials and turned into usable, industrial plastic products like shipping pallets.

I have met with officials in Richmond about setting up recycling collection boxes around downtown Richmond. There would be an initial cost to install the boxes, but whatever is collected — from the boxes or from litter pickups — can bring financial reward to charity.

Have TerraCycle send you a collection box (selected programs) or take any box you may have at your home, office or school. Fill up that box with the waste you are collecting and when it’s full simply download a shipping label from our website and send us your waste. We’ll check it in and credit your account for what you collected. It’s that easy!

I would love to see Richmond take advantage of a program like this. As a former tobacco capital, wouldn’t it be fitting to make good on the waste created by cigarettes? Environmentally friendly organizations like Keep Virginia Beautiful or the James River Association may be interested in receiving money as a reward for the hard work.

This is the type of planning that I’ve trained for during my master’s program at VCU, anybody want to hire me to help bring beneficial this program to RVA?