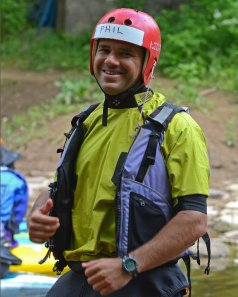 I work at Richmond.com, which is part of the Richmond Media Group. I was asked to contribute to TAS Time, a company blog by Tom Silvestri, president and publisher of the Richmond Times-Dispatch.

Today, we introduce you to Phil Riggan, a new media specialist with Richmond.com. This is Phil’s second tour of duty with our company as you’ll read below. He’s had a variety of experiences with us through the years. By the way, “SPO3” refers to a log-in used by Sports part-time editorial assistants on the computer system used at that time. (Atex was a glorified typewriter for those who remember it.)

What are the major components of your responsibilities at Richmond.com?

Reporter/photographer/videographer/editor/web producer. We have to wear a lot of hats around here, which makes it a more interesting job.

Step us through your career and your experiences.

I got my start as a part-timer in the sports department of the Richmond Times-Dispatch in 1992. SPO3. I eventually got my first full-time job with Media General’s TimesDispatch.com group when that was first formed in 1995 and stayed with that evolving group until 2008. I had a 2½-year stint as the Executive Producer of New Media at NBC-12 before deciding to go graduate school to get my masters in Urban Planning at VCU in fall of 2011. At that time, I was fortunate that Richmond.com had an opening. I really wanted to write more and get out of the office, which Richmond.com has certainly allowed me to do.

I’m an early riser, so I clean up the site and set up all the newsletters and social media for the day before I get into any news, events, interviews, etc. I often have a very segmented routine, so I’m usually writing at the end of the day once my children go to bed. Between work, parenting, schoolwork and volunteering, I’m busy.

What’s your most favorite thing to do?

I’m happiest when I get to be outside somewhere with my camera, even if the weather isn’t perfect. I used to produce the online website for Discover Richmond (and I do again!) and loved the freedom to show off Richmond.

What’s the most memorable assignment or project you’ve completed?

I am very lucky that I got to take over the Richmond.com Why Richmond, Why?!? column. I’ve learned a lot of things about Richmond (and our readers). I get to use the Times-Dispatch archives on occasion, pester people at City Hall, VDOT, Richmond Police … fun times. My favorite storyline has been the recovery of the Mr. Smedley statue, which our column helped get started. He’ll go from 6th Street Marketplace to face down in Styrofoam at a storage facility for a decade to a new home at Jefferson Park this spring.

Photographer David Everette said at the forum for the James River Journal that he wished he had taken pictures behind him of the garbage and pollution in the James River in the 1970s and 80s, not just the beautiful scenery in front of him. He said it would show how far the river has come from being Richmond’s sewer. I keep this in mind wherever I go, not just at the river. Don’t put blinders on, see everything. Show everything.

Who are your heroes?

Ralph White. Good human. I admire his dedication and gentlemanly approach to life. He has never been afraid of hard work and he loves Mother Nature. In media, I’ll never forget the late Gary Burns (a longtime RTD employee who worked in the newsroom and later with digital). He, too, was a good human. Also, especially as I “mature,” I realize how much I take after my mother.

Outside of work, what do you do for fun?

I’m excited about my graduate work at VCU (on track to graduate in May 2015) and hope that my next career will incorporate everything I’ve learned in media. I’ve been told by so many people outside of media that the ability to write and communicate effectively is a dying art and that journalists shouldn’t allow this important role to be devalued.